From Wikipedia, the free encyclopedia
(Redirected from Billboard trailer)

A billboard truck in Denver, Colorado, before 2013

Advertising on a recumbent bicycle in Stratford, England, 2012 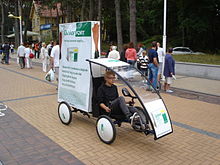 Advertising on the sides of both a bus and a taxi, West Berlin, 1977.

Most mobile billboards are dedicated, customized trucks with large, but narrow, bodies for posting the advertisements. Some of these dedicated units offer features such as external sound systems, illumination, and hot/cold boxes for product sampling. This type of mobile billboard is the most popular among vendors, and the most capable in terms of gaining exposure and quick deployment. An innovative development of mobile billboards is dynamic advertising trailers called “SkyBoard” to hoist large format vinyl banners up to 4,000 square feet (370 m2).[citation needed]

Another trend is to use smaller but more distinctive looking mini mobile billboards, often based on the Daihatsu Midget from Japan, as it is an unusual looking vehicle in Europe and the US. These one-seater vehicles have a very short wheelbase; they can be parked sideways so the large advertising panels on the side are facing the traffic flow.

Some mobile billboards are installed on trucks and trailers that are in service delivering goods. This form of mobile billboards can be less expensive than dedicated trucks, but may also make fewer impressions because the trucks spend more time at loading docks.

Box-type trucks with glass panels enclosing the cargo space can be turned into a mobile 3D display case. Many companies use these trucks for parades, product launches, furniture displays, and general rapid-awareness creation. Almost anything can be placed inside of the boxes for display.

With the new mobile digital display billboards (Traffic AdBoards), changing ad campaigns is as easy as either loading the ads via USB or over the Internet.[citation needed]

Printing technology has improved to the point where outdoor mobile advertising has become an option that may be less expensive than traditional billboard advertising.[citation needed]

Industry analysts, researchers and trade representatives have researched the effectiveness of mobile billboards. Outdoor Advertising Magazine said that outdoor mobile media billboards have a 97% recall rate, and 96% of survey respondents thought mobile advertising is more effective than traditional outdoor advertising.[citation needed] 3M and the American Trucking Association noted 91% of the target noticed the text and graphics on truck advertising, and the Traffic Audit Bureau noted that on local routes monthly impressions ranged from one to four millions hits.[citation needed] Product Acceptance and Research said 94% of respondents recalled seeing the Mobile Billboard, with 80% recalling the specific advertisement; the billboards resulted in a sales increase of 107%.

Mobile Billboards are generally used due to the perceived benefits such as being able to deliver a message in places that other static billboards are unable to. They also offer a median that doesn’t get cluttered by other advertisements and aren’t generally seen near competitors. Many also find it advantageous that the message is less likely to be tuned out by drivers than other advertising medians. They also don’t require any booking time, and have a low setup time.

Some municipalities have strict laws against mobile advertisements.[citation needed] Mobile billboards have been accused of congesting already congested streets, since they are deployed in areas with high population density. In such areas, non-motorized but mobile advertisements (i.e. adbikes and billboard bicycles) can often be used as a substitute. Smaller cities code compliance often use a complaint driven model wherein the smaller lighter trucks seem to have fewer complaints and are often allowed. [1][citation needed] These mobile billboard trucks have been welcomed more by municipalities over the larger trucks.[citation needed]

In the US, mobile advertising falls under the First Amendment to the United States Constitution. The US Supreme Court has issued rulings that protect “commercial speech” as well. Hence, it is difficult for any jurisdiction to limit such advertising beyond public safety issues. Since most complaints regarding mobile advertising relate to oversized trucks with loudspeakers, the bigger companies are more likely to have lawyers on retainer who can remind the authorities of US Constitutional protection of free speech and commerce. However, content-neutral regulations of speech with a legitimate government interest are subject to a more deferential standard of review. Ordinances banning mobile billboards on traffic and public safety grounds, regardless of message and without singling out commercial advertisement, have been largely upheld as legitimately and reasonably regulating the form, and not content, of speech.[citation needed]

In Norway, the use of wrap advertising on buses was prohibited by the road authorities. The reason behind the ban was that in an emergency, the windows might need to serve as an emergency exit and that the advertising would make the window harder to break with the emergency hammer. Gaia Trafikk argued against the ban, pointing out that their tests showed that the thin wrap had no impact on the breakability of the window, but did remove the advertising which covered the windows.[2]

There are many other forms of outdoor mobile advertising, which are considered mobile billboards by some advertising professionals.[who?][citation needed]

3 Replies to “What is a mobile billboard?”

What are you looking for?